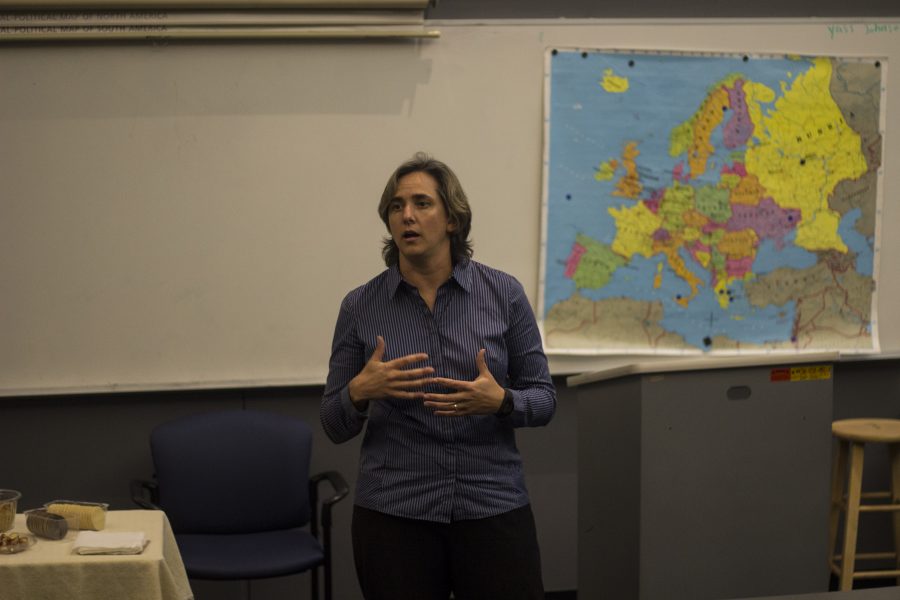 by Samantha Fredberg
Superintendent of North Andover public schools and former North principal Jennifer Price gave a presentation of her research, proving that low income students at North are underachieving, and explained how she lowered the gap Thursday, March 10 in the Film Lecture Hall as part of the Huntington Lecture Series.
Price spent a year studying the achievement gap when she was principal of North. “When I arrived at Newton North High School in 2006, it was pretty well established that the school was working for 85 percent of the kids. There were groups of kids who the school did not work for. That is the achievement gap,” Price said.
According to Price, achievement is measured based on standardized test scores and grade point average (GPA). Price explained that students who had free or reduced lunch did not have the same level of achievement as other students. “We said all right, even when you control other factors, poor kids at Newton North are underachieving.”
Price stated that one of the groups studied was African American students. Price decided not to focus her research on race because there were a lot of discussions on the topic at the time.
In 2010, Price made the decision to tell faculty which students qualified for free or reduced lunch with the hope that the students would be given extra help. By law, only cafeteria staff can know this information, yet schools are required to tell state agencies the information when a student is taking standardized tests.
“I as principal am allowed to share that information with teachers when they look over MCAS scores, so it’s a bit of a loophole,” Price explained.
Price continued to share the the information about students’ financial states despite resistance from teachers. Price said one teacher told her “I am never looking at this list. I am ripping it up.”
According to Price, it is okay that students and their families were unaware of the educators’ knowledge of their financial stability because the significant change in the achievement gap is worth it.
When comparing pre and post information output data, Price saw that there was a difference in achievement scoring. With regard to students with low income,“Just by letting teachers know which kids these are made a significant difference,” she said.
“It’s really about relationships. If a kid in a classroom believes that their teacher cares about them, and they believe that they can do it, then they will do it. The individual connections that teachers, educators, and mentors have are all necessary. Students need to have good relationships with teachers,” Price explained about action in the future.
The Huntington Lecture Series presents lectures named after former North principal Jennifer Huntington with the intention of teaching the community topics outside of North.