Boys' Hockey advances to second round of state tournament 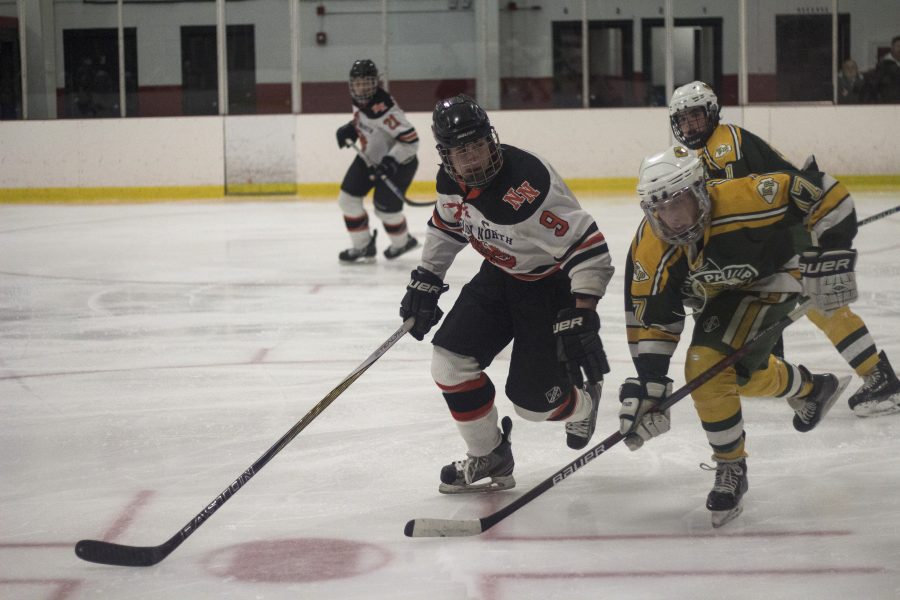 by Blake Krantz
Boys’ hockey defeated King Phillip 3-1 in front of a large home crowd in the first round of the state tournament Wednesday night in Watertown to advance to the second round of the playoffs for the second consecutive season.
The Tigers initially went up 1-0 with three minutes remaining in the first period on a goal by junior forward Pat Mullowney. King Phillip then tied the game early in the second and the team once again took the lead on a goal by senior forward Mike Hart in that same period. Junior Joe Zeidan assisted on the second goal, and the Tigers would hold the lead for the rest of the game.
After a timeout with under a minute remaining in the third, Mullowney scored his second goal of the night on an empty net to clinch the victory for the Tigers. Allowing just one goal, senior Thomas Joyce was stellar in goal for the team throughout the win.
According to Joyce, a captain with Hart and senior Dante Leone, “the most important thing that went well was that we really played as a team and played physically, so we were able to out work the other team.”
A hit by Leone midway through the first period exemplified this physical play for the team, as he checked a King Phillip player over the middle of the ice and electrified the crowd in the stands.
This hit was a “tone-setting” play, according to coach Jaime Gresser, who also explained that “physical play on both sides of the puck is essential whether we are protecting the puck on a cycle, using leverage in puck battles, or separating their players from the puck.”
Gresser labeled “forechecking and transition play” as successes in the King Phillip game, as “all three lines were able to create offensive chances off of the forecheck.” Gresser also added that “breaking out of our zone and regrouping in the neutral zone” were strengths on Wednesday.
The Tigers received many key contributions from older players throughout the game, such as Hart’s go-ahead goal, Leone’s hit, and Joyce’s goaltending, and for Joyce, the “experience from last year’s tournament” has helped the Tigers “gain confidence going into this year’s tournament.”
The team will now play Braintree Friday night in Bourne, a game in which it will be important for the Tigers to “get pucks and bodies to their net early and often, and keep them away from ours,” as Gresser said.
For Joyce, the Tigers’ mindset going into the game is important.
“We just need to play our best game. We can only control what we can control so we just need to play relaxed and play with confidence, and good things will happen,” he said.