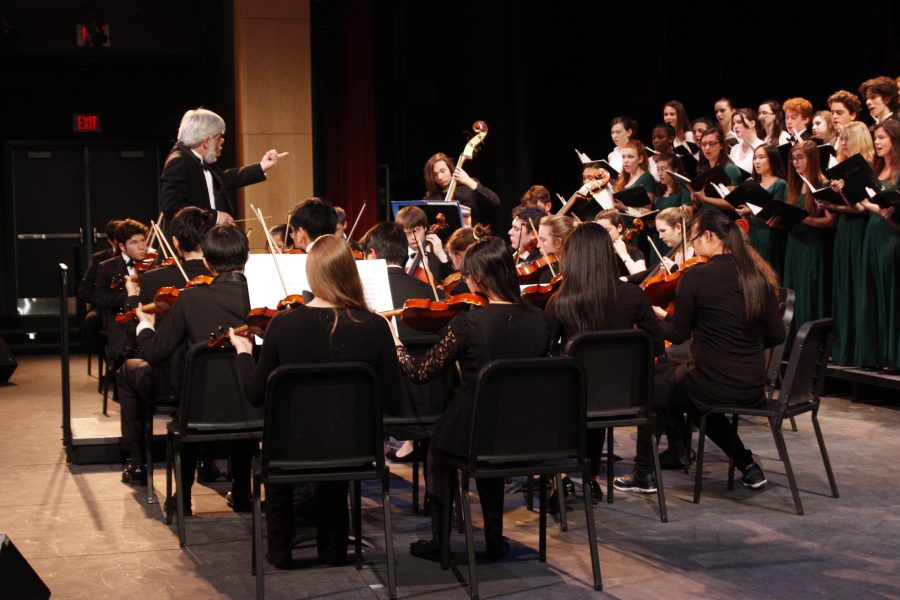 Musicians performed Wednesday and Thursday in the auditorium as a part of Winterfest I and II.
[divider]Winterfest I[/divider]
by Hannah Liu
Displaying students’ musical talent and passion, Winterfest I connected the audience to their emotions through dramatic, grand pieces.
The concert featured the Brass Ensemble, Clarinet Duo, Flute Quartet, Saxophone Ensemble, Ceili Group, Symphonic Band, and Wind Ensemble.
According to music teacher Richard Labedz, the director of the groups, “many students playing several instruments.” Labedz added that the goal of the concert was to celebrate music.
The concert began with Brass Ensemble playing “A Welsh Lullaby” arranged by K. Lee Scott. Its moderate pace, mezzo forte, and drawn out melody gave it a true lullaby feel.
Later, Flute Quartet displayed “Rose Cottage” from “An Gaelic Tiodhlac,” that continued a peaceful tune. There was a unity that at some moments sounded like wind whistling.
The concert continued with the Saxophone Ensemble, which performed both “Les Plaisirs” by G.P. Teleman and “Reflections” by J. Brahams. The bright and youthful melody gave them teasing, yet celebratory feelings.
A highlight of the concert was Ceili, a student-run group that plays traditional Scottish and Irish folk music. While these musicians are not traditionally in the concert, Labedz added the students “just started playing lunch blocks, X-blocks, and after school.” He put them in to “start celebrating” their music. The group consisted of an accordionist, two violinists, a bassist, a pianist, and a drummer. They played several upbeat songs, and it was clear that these musicians were passionate about their music from their energy and confidence. Contrary to the black and white dress of the other groups, Ceili members wore green shirts, plaid shirts, and sweaters.
All the ensembles came together to play “Kronos” by Robert W. Smith. It had a familiar, patriotic tune and showed could unite together like professionals. The dramatic music was accented by a unique, muffled popping sound in the background with drums rolling, which it seemed appropriate for the arrival of royalty.
Next, the Wind Ensemble played “Second Suite in F” by Gustav Holst. The sounds ranged from heavy, low, and mellow to faster and urgent. Throughout the piece, the percussion sections kept a fast tempo.
The Wind Ensemble joined with the Symphonic Band to Play “High School Cadets” by John Phillip Sousa.
All the groups joined to end the concert with “Sun Cycles” by Brian Balmages, and it was an epic ending to a great concert. An urgent and catchy drumbeat held the piece together. The song concluded with a fast, bright melody that tied the concert together and left the audience satisfied.
The talented musicians in Winterfest I appealed to the audience of parents, grandparents, and siblings, allowing them to enjoy the students’ complex, passionate performance.
[divider]Winterfest II[/divider]
by Nour Chahboun
Audience members were captivated as powerful, breathtaking music filled the auditorium during Winterfest II Thursday.
Orchestra, Concert Choir, and Family Singers, all directed by music teacher Adam Grossman, performed powerful pieces that left a lasting impression on audience members. Nobel Prize performer Lynn Chang, ’71, performed with the Orchestra as a special guest.
The concert began with Orchestra, playing “Summer (from the Four Seasons)” by Antonio Vivaldi. The piece was broken up into three movements, accompanied by sonnets read by senior Ethan Smith. The first of the three movements, “Allegro non molto,” started out with a haunting and alarming melody that excited the audience. As musicians impressively picked up the pace, a loud and powerful crescendo filled the room. Surprisingly, the end was sweet and peaceful with quick strokes mixed with high notes, leaving a youthful, lasting effect.
“Adagio e piano,” the second movement, started with Chang playing a high and piercing tone on the violin. The piece consisted of a call and response between Chang and the Orchestra. Chang played peaceful and serene high tones, which contrasted Orchestra’s loud and frantic melody.
Next was “Presto,” which began with a busy, rapid tempo, expressing beautiful urgency. The ending was purposeful, and Grossman’s nod to the performers made it clear that Orchestra’s inspiring performance had been perfectly executed. Moved by the piece, the audience gave a standing ovation.
Next, Chang gave a speech commemorating both his former music director at North and current director Adam Grossman. Chang described his past music director as an influential person that “greatly inspired” him. He then played two traditional Chinese folksongs on the violin. His performance showed his passion for the instrument and received a standing ovation, with Orchestra stomping their feet to show recognition.
Concert Choir and Family Singers then joined the Orchestra on stage to perform “Mass in G” by Franz Schubert. Orchestra’s first movement in “Kyrie” was serene as the choruses sang in Latin. Soprano soloist junior Olivia Duvall, sang thrilling high notes.
The third movement, “Credo,” had a soft, dreamy feel, although in parts playfulness shone through. The final movement, “Agnus Dei,” began mysteriously, accompanied by the choruses. Orchestra ended the movement peacefully, each member clearly proud of the group’s performance
The concert was filled with beautiful pieces that made for an inspiring night for all.