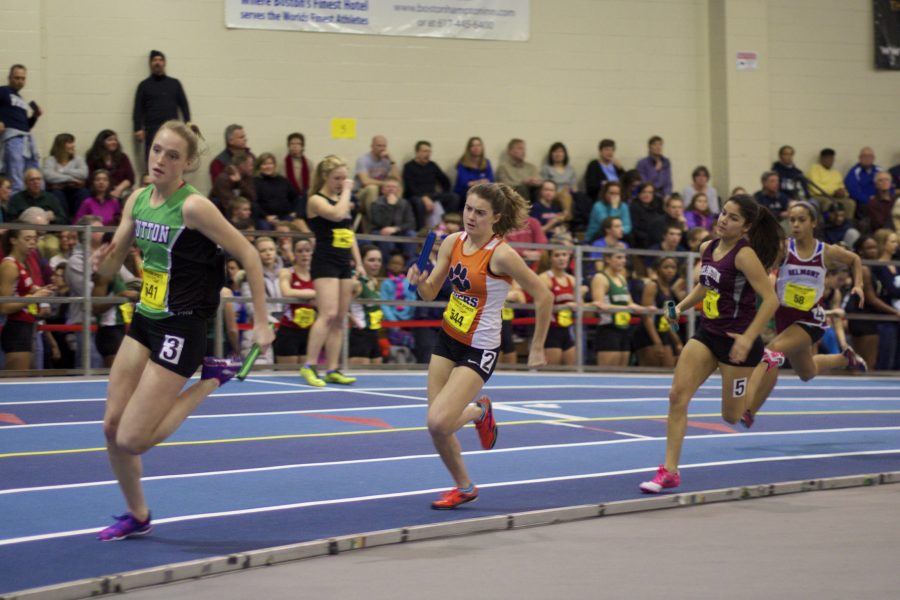 by Adam Rabinowitz
Girls’ indoor track, 6-0, finished off its season in the All-State meet at the Reggie Lewis Center February 21.
The Tigers did not do as well as they have in past competitions, but still had several members place in their respective events, according to senior Olivia Gomez, a captain with seniors Adrianna Batista, Isabella Reilly and Elena Schwartz.
“It wasn’t our best meet, but we weren’t expected to win anyway. The type of team that wins All-States is a small team with lots of superstars. Our team has got good depth and we have good performers in lots of different events, but not a whole lot of superstars,” she said.
Reilly echoed her sentiments, stating that she felt it wasn’t the best competition for the Tigers, and that it definitely “could have gone better.”
“For us All-States is more about individual performance rather than the team as a whole. Personally, the relay event I competed in did not do too well. Aside from that I know several athletes that were not completely enthusiastic about their performances either,” she said.
The team made a few mistakes during their performances “due to the high level of pressure” said Gomez, ultimately hurting it in its score.
“The baton was dropped in the 4×200 and so we didn’t do as well in that as we thought we would,” she said. “Our best hurdler, [senior] Melissa Hurwitz, got tripped up on the second to last hurdle and didn’t finish as well as she should have.”
Hurwitz ultimately jumped a personal record of 17 ft and five inches, earning a fourth place finish.
Overall however, the Tigers shined in the meet, but not just in their performances.
“Most of our girls performed very well, and we came out with several fourth through eighth places. I think where we shined through in this meet was cheering our teammates on and staying optimistic even though we didn’t get the win that we are accustomed to,” she said.
Batista added that even though the meet did not go as well for the Tigers as previous ones, this season was definitely successful for the team.
“There’s no way this one meet will taint my memories of the incredibly successful season we’ve had. As athletes we are always hard on ourselves but I find myself constantly reminding the team that one bad meet does not mean the end of the world. This meet simply showed us things that we can work towards for outdoors,” she said.
She also said that this year was overall very successful for the Tigers.
“We surpassed all expectations. Every member of the team, freshman through senior, really stepped it up,” she said.
Gomez added that although this team lacked the “superstars that [it] had in the past,” the team still performed very well.
“Everyone on the team showed that they are incredibly hardworking and that they value supporting each other more than anything. I think this may be one of the most enthusiastic and committed North track teams yet, and it’s certainly the best one I’ve been on. These girls are simply inspiring, and I enjoy spending time with them both on and off the track,” she said.
She also said that she was very proud of the cheering and support that the team portrayed at meets as well as practices.
“There’s nothing like showing up to practices and competitions with people that you know are not only your teammates but also your friends. That’s the kind of support you hope for when you’re putting yourself in a situation like running in front of hundreds of people,” she said.