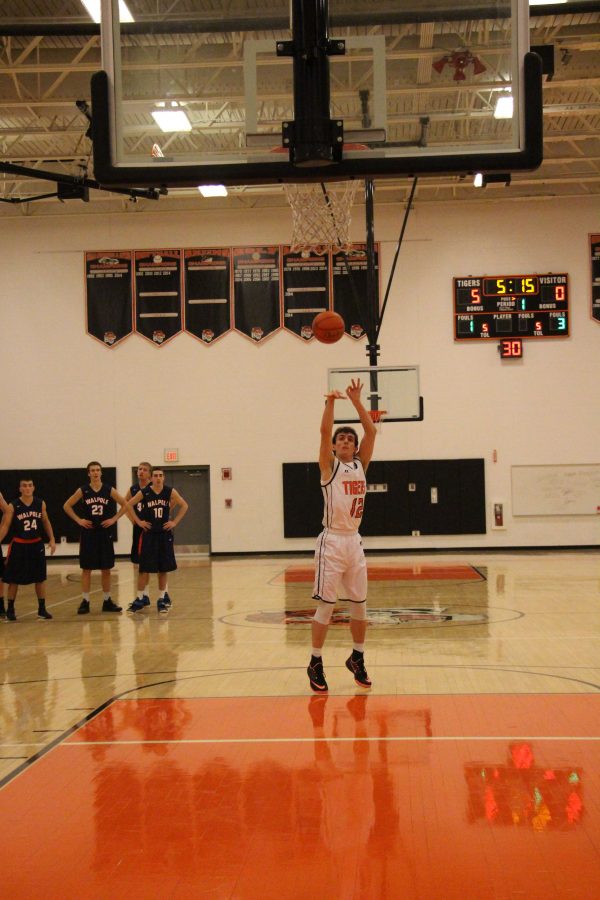 Mobley shoots a free throw in a 71-46 boys' basketball win over Walpole Dec. 12.

by MacKenzie Silvia
Boys’ basketball, 20-2, is prepared to come out strong in the State Tournament, according to senior Tommy Mobley, a captain with seniors Sam Jefferson and Brett Stanton.
“This is the best regular season record we have had in years and it has also been one of the toughest schedule we have had,” Mobley said. “This year has been incredible so far.”
Both Jefferson and Stanton attribute the success of the season to prior experience the Tigers have had with the post season.
“I think having tournament experience is big for us,” Jefferson said. “We have great leadership from all our returning players who have played on the big stage.”
Stanton agrees that the team can “make a long run in the tournament” and the team’s “experience will help [it] get there.”
Jefferson believes the team has successfully seized all opportunities given to them and “it was this year that everything has come together and we’ve been able take advantage of our winning situation.”
Mobley believes it is the “player leadership that has helped [them] get this far.”
“Everyone on the team has really come together and we have had a ton of fun,” he said. “There have been many players who have all stepped up to be big leaders for us even though they’re not captains.”
Stanton believes the team has what it takes to make it far in the post-season games.
“We have high hopes that we can make a long run in the tournament,” he said.
“We need to keep it up,” Mobley said. “We want to extend this great season as long as possible so we can have more fun and win it.”
The second seed Tigers will take on the 15th seed Durfee in the first round of the State Tournament 6:30pm Wednesday at home.