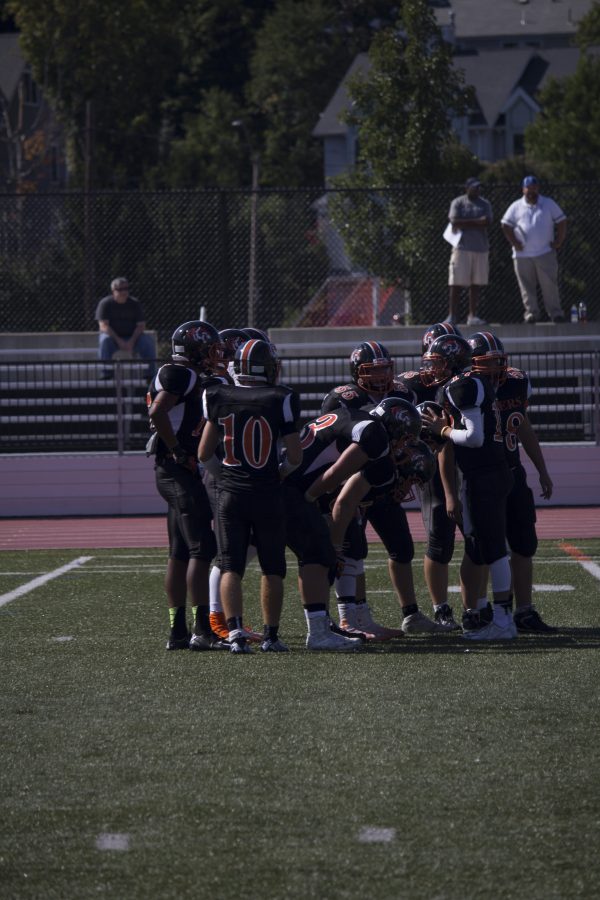 by MacKenzie Silvia
Football ended its season on a high note after a 41-13 win over Brookline on Thanksgiving at Dickinson Stadium. The Tigers’ 9-2 record was good enough to help them clinch the Bay State Carey division title.
Senior Curtis Beatrice, a captain with seniors Andrew DeNucci, Chris Quinn, and Devaughn White, attributes the successful season to the improvement from all players this season.
“Our team developed really well on and off the field this year,” Beatrice said. “Our defense was great all year and the offense really picked it up against Brookline. The off-field development was great from seniors all the way down to the sophomores.”
DeNucci believes that the team “surpassed all initial expectations.”
Coach Peter Capodilupo ended his North career after 31 seasons of coaching the Tigers.
According to the Boston Globe, coach “Cappy” ended his career with an overall record of 165-167-1.
The Tigers left Capodilupo with a game to remember. Coming out hot, seniors Mikey Barbieri and Napoleon Miller, along with junior Mike Gately scored touchdowns, putting the Tigers up 27-0 at the end of the first half.
North was back on the attack for the second half, with James Hodgson scoring an early third quarter touchdown. Joe DeNucci continued the run with a touchdown early in the fourth, pushing the Tigers to 41-0 with 11 minutes left in the game.
When the game was over, Brookline scored two garbage-time touchdowns in the fourth to cut into the Tiger lead. The Tigers managed to hold off Brookline after that point leaving the score at 41-13.
Capodilupo will be missed by all of his athletes and students, Quinn said.
“I’m sure wherever coach Cappy ends up next he will bring the same passion and love for the game that he showed us,” Quinn said. “Anyone who has the opportunity to learn from him on the field or in the classroom is very lucky and although I am sad to see him go, I wish him the best and hope he finds success in whatever he does.”
Even though it was a sad day for many seniors and Capodilupo, the memories will always stick, Beatrice said.
“Everybody loved this  season and it was definitely the most memorable season of football during my career at North,” Beatrice said. “Nothing beats playing your senior season with some of your best friends that you have been playing with since E squad in Pop Warner.”
DeNucci agrees that this season was a memorable one and couldn’t have ended in a better way.
“The Thanksgiving day game was a perfect way to go out with the snow and special orange jerseys and winning big over Brookline,” he said.