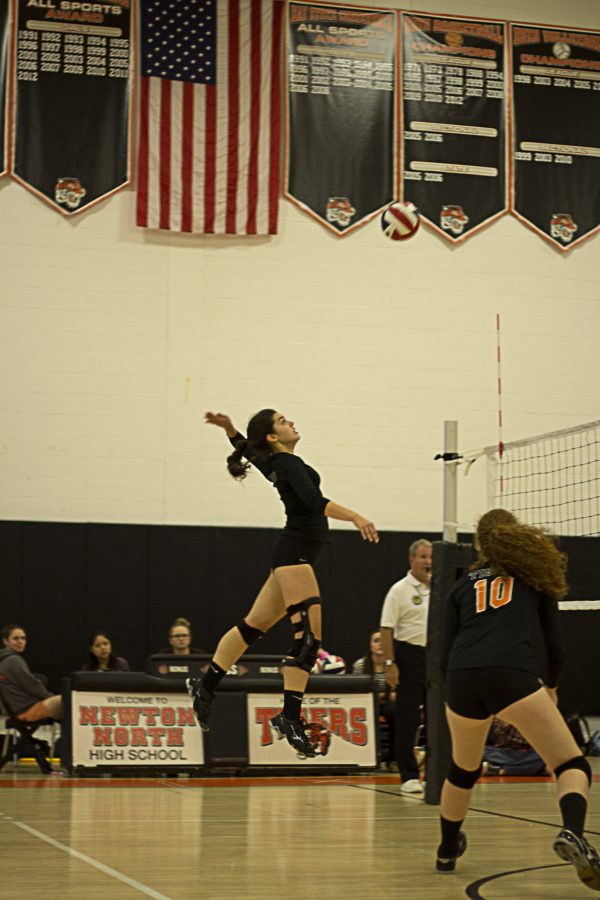 Senior Madeleine Lundberg goes up for a spike. Photo by Josh Shub-Seltzer.

by Adam Rabinowitz
Girls’ volleyball, 18-3, beat King Philip 3-0 in their second match of the postseason, advancing to the sectional finals.
According to senior Bali Connors, a captain with the rest of the team’s seniors, the match showed the Tigers just how strong of a team they are.
“The match went really well. They were a really solid team but the game showed us how sharp we play and how strong of a team we really are. We have incredible players in every position,” she said.
According to senior Sammy Marcus, the team played really well in the first set, sticking to its game plan and limiting errors. The Tigers faced more of a challenge in the second and third sets, but the team still managed to pull through.
“During the second set we fell short but were able to make a huge comeback and pull out the win. The third set was purely mental. We had the skills to beat them but it was up to us to stay completely focused and play hard,” she said.
The set was close in the beginning but the Tigers pulled away near the end, winning 25-18.
Marcus also said that as the Tigers prepares for their match Saturday, they have their eyes set on one thing, beating Brookline.
“Our goal on Saturday is to play with the same tough and competitive demeanor and crush Brookline,” she said.
According to senior Tess Simmons, the team will be focusing on shutting down one of Brookline’s stars.
“They have one good hitter on their team named Nica who hits outside. So we will work on blocking and digging outside hitters. But mostly we will focus on playing our game and not worrying about them,” she said.
Staying focused has been a problem for the Tigers in the past, according to Simmons. She said that it will be important that the team works hard to not get distracted.
Simmons also said that the match will be close, and that she is hopeful the Tigers can pull out a win.
“Overall, I feel we are a stronger team but it will be all mental,” she said.
The Tigers face Brookline at Marlborough High School Saturday at 7.