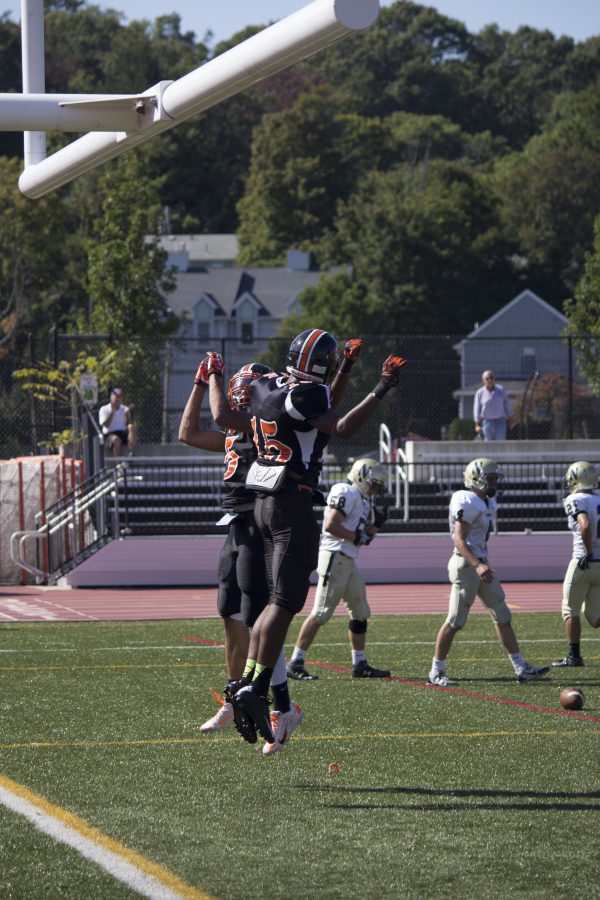 by MacKenzie Silvia
Despite the rain and less than satisfactory weather, football, 8-0, managed to pull out a win against New Bedford, 4-4.
The second-seeded Tigers defeated New Bedford 24-13 at home yesterday in their first tournament game of the year.
After falling behind early, the Tigers responded with a defensive stand. Senior Devaughn White blocked a punt at New Bedford’s 10-yard line, setting up junior Mike Gately’s touchdown to tie up the game.
“I’m really proud of the fact that when we went down early we bounced back,” said senior Andrew DeNucci, a captain with Curtis Beatrice, Chris Quinn, and Devaughn White.
The Tigers’ defense managed to hold the Whalers scoreless through the rest of the first half, while the offense added 10 more points with a 22-yard field goal from sophomore David Guekguezian and a 5-yard touchdown run from sophomore Jimmy Hodgson.
The Tigers tacked on even more with an exciting 48-yard rushing touchdown from senior Napoleon Miller to go up 23-7 in the third. Guekguezian made it 24 with the extra point. Miller rushed for 138 yards total.
Late in the fourth, the Whalers cut the score to 24-13 with a 56-yard touchdown from Andrew Rapoza. They attempted a two-point conversion but fell short with an incomplete pass. North managed to hold off New Bedford’s rally to end the game with a 24-13 win.
“Yesterday’s game went great. Although we had 5 turnovers, we think it was one of our best defensive games of the year,” said Beatrice. “Even with the harsh conditions we found a way to put points up on the board.”
“All around we played a great game and got the first playoff win at Newton North ever, so that’s a pretty awesome feeling.”
The Tigers will play BC High at home in the Division 1 South semifinals Saturday.