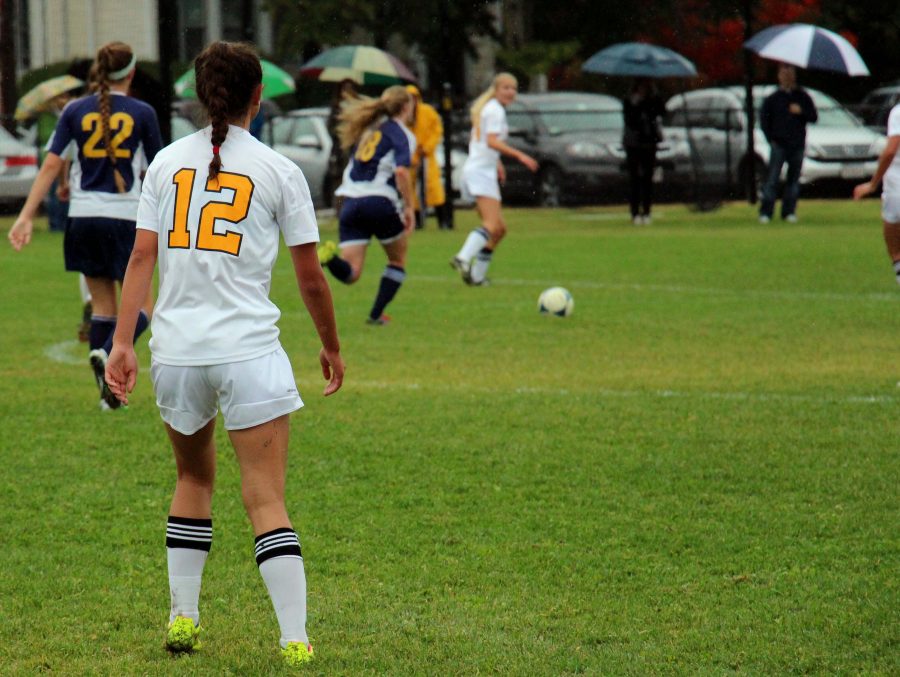 by Jacob Gurvis
After the final whistle blows tomorrow against Framingham, girls’ soccer, 3-12-1, will finish their challenging and injury-plagued season.
“We have definitely faced a lot of challenges this season. I think that losing eight seniors last year and having a few big injuries has impacted us, but we’ve been trying to keep our spirits high,” said senior Katie Nugent, a captain with seniors Julia Lindsay and Maddie Maloney.
Coach James Hamblin is pleased with the players’ effort, despite the lack of results. He said the team “has shown great work rate and determination in all games. They have been playing some good soccer, just not getting the rewards they deserve.”
Nugent also said the Tigers have been working hard all season. “Every game, the team puts the effort in. We have a good work ethic, but unfortunately have a hard time scoring! We’ve lost multiple games by only one goal in the last 10-15 mins of the game which is very frustrating for the team,” she said.
Both Hamblin and Nugent believe the Tigers need to improve their consistency and execution of plays. Hamblin said the team needs to mostly work on “composure and quality in front of goal, along with our final passes from midfield into attack being quicker and more consistent.”
Nugent echoed those sentiments, saying, “I think that we need to improve on finishing our chances when we have them and playing 100% from whistle to whistle.”
Despite the lackluster record, the Tigers’ defense and goaltending have been strong all season. “The team overall has played well together, but mainly the back four have been soaking up the most pressure and always compete along with our goalkeeper,” said Hamblin.
Nugent noted that Lindsay, a defender, and junior Eliza Bresler, goalkeeper, have “really held the back line together throughout the season.” Nugent also said that senior Taylor Lord and sophomore Paige Dobies have “been working well together in the midfield and have gotten stronger as the season went on.”
The season has not been all negative, and Hamblin said the “great team win” against Weymouth a couple weeks ago was his highlight of the season.
For Nugent, Senior Day was a special day, and was her highlight. “Each senior received their gift, which is a bed sheet with their name on it and letters from the team. Anna Nesgos, Charlotte Feldman and I, who have been injured all season also got to be a part of the kickoff on Senior Day, which was very special to us,” she said.
The Tigers end their season tomorrow with a final game against Framingham, a game Hamblin hopes the team can pull out. “It would be nice to end the season on a win,” he said.
Nugent would also like to end her season with a win. “I hope we can end the season on a positive note!”