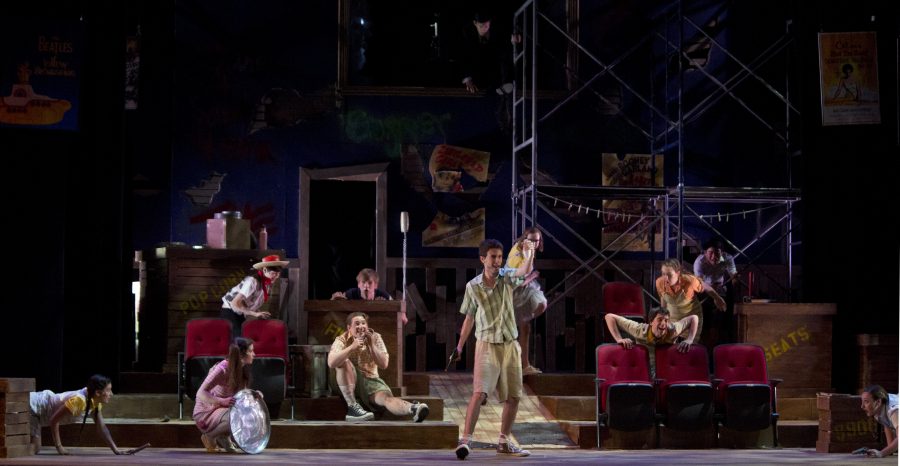 The Cast of "Blood Brothers"

by Jessica Tharaud
Posters of classic movies adorn the auditorium, depicting famous films like “Some Like It Hot” and “Cat on a Hot Tin Roof.” The stage itself has been transformed into an old-style theatre with graffiti staining the backdrop.
“Blood Brothers,” a thrilling musical written by Willy Russell taking place in mid-twentieth century England, runs tonight through Saturday night at 7:30 p.m.
The musical, directed by seniors Kelsey Fox and Juliet Roll, opens with the narrator warning about the events to transpire. The narrator, played by senior Ezra Dulit-Greenberg, forewarns the audience that twins separated at birth are fated to die the day they discover that they are brothers.
When Mrs. Johnstone’s husband deserts her, she discovers that she is pregnant with twins. Mrs. Johnstone, who already has more children than she can afford, woefully wonders how she will be able to take care of her children alone when her employer, Mrs. Lyons, approaches her with a proposition.

Unable to have children, Mrs. Lyons offers to adopt one of Mrs. Johnstone’s twins and to pass it off as her own. They agree on the condition that Mrs. Johnstone will see her son everyday at work, but Mrs. Johnstone is fired soon after she gives away one of her sons. To dissuade her from telling anyone, Mrs. Lyons cautions that the boys will die on the day they discover their relation to each other.
While one twin, Mickey Johnstone, grows up poor and with hardships, his twin brother Eddie Lyons lives luxuriously and is provided with the best of everything. The two meet accidentally when they are almost eight years old, and instantly become friends. They discover that they have the same birthday, and swear that they will be best friends and “blood brothers.”
Despite attempts by Mrs. Lyons to keep the twins apart, they become inseparable as teenagers and fall in love with the same girl.
Senior Steven Kelly played Mickey with senior Will Champion as Eddie, each giving dynamic and emotional performances. As eight-year-olds, Kelly and Champion played their roles convincingly and with complete confidence. The minute details they added to their performances truly conveyed their skill as actors, such as the way they moved their arms at awkward angles as children.
Mickey and Eddie grow to be teenagers, and Kelly and Champion’s ability to match their ages showed their command and belief in their characters. Their acting created a pair of twins that the audience rooted for even up until the inevitable end. They were truly spectacular and engaging to watch.

Throughout the entire show, the narrator adds a dose of creepiness as a contrast to the relatively happy childhood experienced by Mickey and Eddy. He is always on stage, whether in the background or interacting with the main characters. The narrator’s presence remind viewers of the inevitable end, a constant as the characters change and evolve into adults that repeatedly warns that the devil is “knocking on your door.”
And after two hours of excitement and pure entertainment, “Blood Brothers” came to a close in an unforgettable and emotionally charged scene. The narrator left the audience with serious questions to consider about class, superstition, and tragedy in an incredible climax to a thoroughly enjoyable production.
Tickets are $10 and sold at all lunches and on Theatre Ink’s website.
Delete Image
Align Left
Align Center
Align Right
Align Left
Align Center
Delete Heading