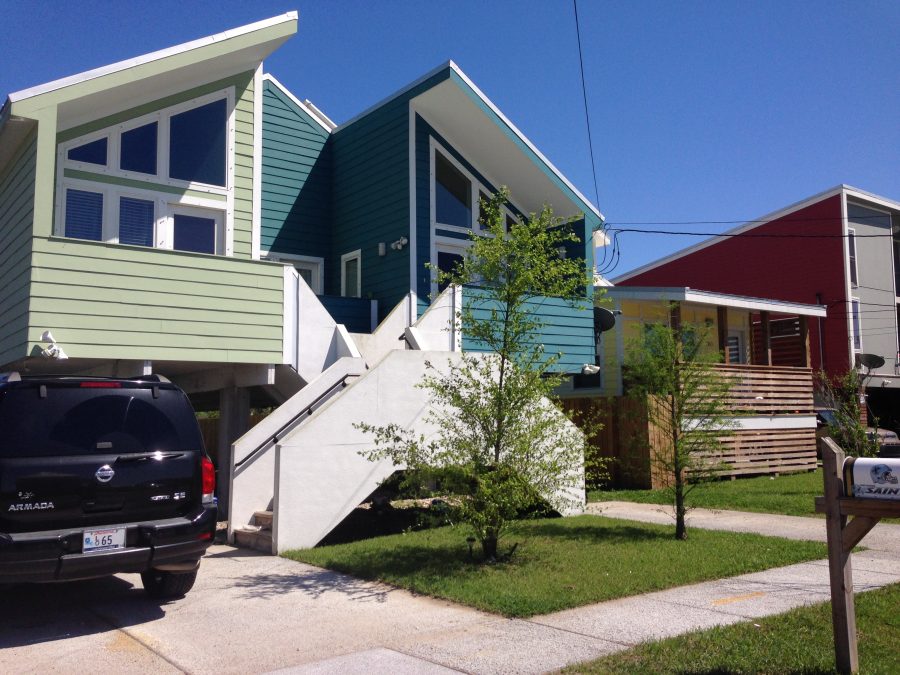 by Leah Budson
Each year, a group of students from this school goes on a service trip to New Orleans to help repair houses devastated by Hurricane Katrina. This blog will give you daily updates, through text, interviews, pictures, and videos, of our trip. The group includes students in the Leadership in a Diverse Society course, carpentry major students, students from the Blue Hills Regional Technical School, and advanced TV production students. This blog will focus more closely on the Leadership class, as the writer is a student in that program.
Day 4: Wednesday, April 9
One of these things is not like the other. When driving through the Lower Ninth Ward, many of the houses look much the same, with a distinctive old-New-Orleans style. A few stretches of street, however, stand out with very modern, almost avant-garde houses.
After Hurricane Katrina, actor Brad Pitt paid for the building of houses in the Lower Ninth Ward of New Orleans. These homes look strikingly different from the houses that previously existed in the ward, causing controversy over whether the project was a wonderful or, in actuality, took away some of the culture that had existed in the ward.
“As a person, I don’t mind the house at all,” said senior Patricia Muumba. “But from another perspective, if I was born here, I would be so mad that they changed the way I had known New Orleans.
“It’s harder to lose your culture than a house.”
On the other hand, others liked the houses. Steve, the man whose house the students were working on, said, “I like them. Some people don’t, but I love them.”
Senior Julie Fletcher pointed out, “I have a really hard time criticizing this much generosity.”
Delete Image
Align Left
Align Center
Align Right
Align Left
Align Center
Delete Heading