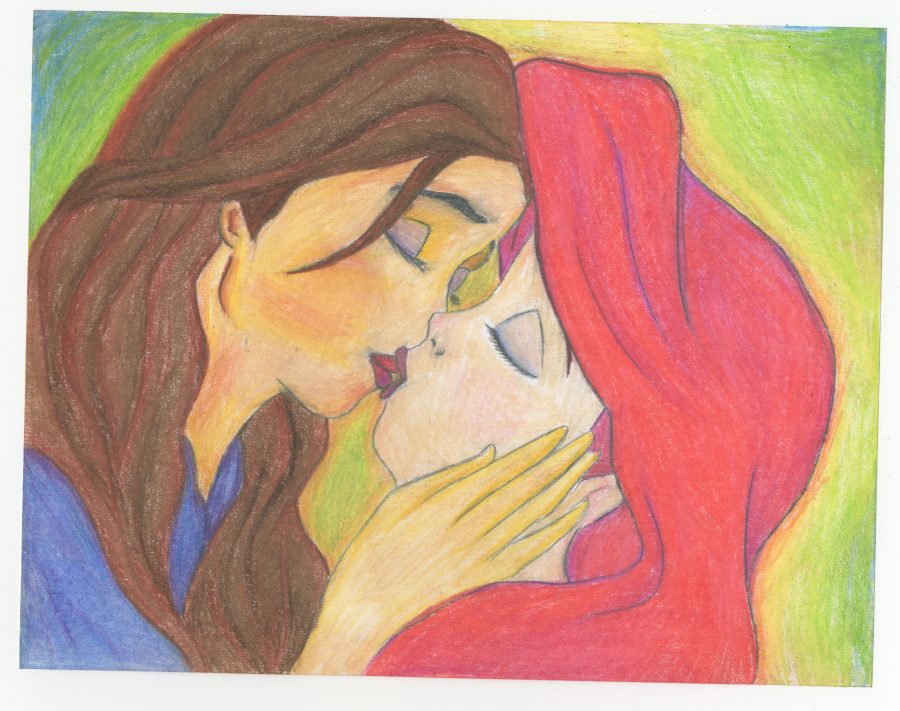 The above drawing by sophomore Julia Dwyer was shown outside the auditorium as part of the panel.

Students participated in Speak Out D-block yesterday in the auditorium as a part of Transgender Bisexual Gay Lesbian Awareness Day (ToBGLAD). The Gender Sexuality Alliance (GSA) organized this on-campus event which involved students reading both their own work and other published pieces, as well as a dance performance and two a cappella groups.

Junior Spencer Bronk opened the panel by introducing Revolutionary Voices: A Multicultural Queer Youth Anthology, compiled by Amy Sonnie, from which several speakers during the event read excerpts. Original pieces of writing, written by students from this school, were also read.

Junior Sam Taylor read an untitled, anonymous piece from the anthology. She said that, “We have got to help each other heal.”

After, sophomore Julia Dwyer read her sophomore speech entitled “Breaking the Silence.” She explained that “this time, last year” she was in the “loneliest place in the world”: the closet. She described feeling a “wave of relief” knowing she was not alone after abandoning the isolated, silent closet.

She believed her opinion about the Day of Silence changed after she came out. “How does silencing the warriors help win the war?” she asked. She wanted the GSA to “use our voices to speak for those who have none.”

Senior Lillia Baird read an anonymous student piece called “A Coming Out Story” in three parts. She presented the three parts individually between other speakers. The story began as a young boy decided to come out to his mother during Hurricane Sandy in 2012. He was haunted by his mother’s jokes about gays and felt the harm of prejudice and hate in his daily life. “I knew the storm would be life changing,” she read. The writer chose to let it change his relationship with his mother. After being stuck in his house for the week of the storm, he was nervous and stressed about coming out to his mother. He “cherished the moments before my life went downhill,” and finally was able to get the words out of his mouth after hours of silence. His mother was outraged, and the next day, more torment began. His parents even teased him about his homosexuality, asking if he was joking or when he would get a girlfriend. 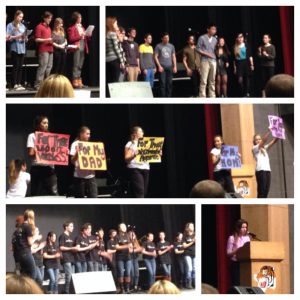 Junior Leah Budson, an officer of the GSA, read a piece by Ryan Gluckman from the anthology. The piece detailed a teenage girl who had a lesbian mother. Her mother was pelted by eggs when she marched in a Halloween parade identifying her sexual orientation, but the girl continued to laugh at jokes at the expense of gay people to avoid being mistaken as a “lower” person herself.

In Gluckman’s town, a mother outraged by finding her seven-year-old reading a book from the library entitled “Daddy’s Roommate” wrote a letter to the editor of the local paper. The book explained how a gay relationship can be a healthy environment for a child to grow up with, but the mother believed the library was “pushing a gay agenda” and the only resolution was to have a specific section for those offensive books. At a public hearing, the Gluckman finally speaks out, admitting that her mother is gay and explaining why the book should not be removed.

Next, several members of the fall dance team performed the song “Same Love” by Macklemore. They ended their dance performance by holding up signs which read “For those who are voiceless” and “For my dad,” among others.

Following their performance, Bronk read his own piece describing two boys in parallel situations, unaware of their hidden pain. One boy was kicked out of his home for his sexuality and lived with his friend, and wanted to “bend to the wind like the grass” and be resilient, to stand back up. One boy felt that “sneaking around” was unjust for his love, and needed to display his sexuality openly.

Following the poem, senior Kathryn Adelson read a piece by Katherine Grobman from the anthology, entitled “Am I Happy?” It was written by a trans woman who was asked if she were happier because of their transition. “There just isn’t one concrete thing,” such as clothes, makeup or hair. The writer described that although she lived a childhood in pain, she can “feel happiness” now and is more “alive than I ever have been.” Grobman described that the transition “doesn’t make me happy, it makes it possible for me to find happiness” within herself.

Budson then read a piece called “Labels, Names & Identity” by T. Rowan from the anthology. She said that “sexuality is fluid, infinite and ever changing” and compared humans to different shades of maple leaves changing color in the autumn. Sexuality was not black or white, but grey, and “the biggest box of drawing pencils” would not be specific enough to identify a human’s identity in a simple term.

The Northern Lights a capella group performed “Where Is The Love?” by the Black Eyed Peas. Members of the group beat-boxed in the background while soloists sang verses of the song.

Between the two songs, Thornely presented a piece he wrote entitled “The Blight of Homophobia,” where he discussed the responsibility of others to not judge based on sexual orientation.

The Melacatones a capella group performed “Brave” by Sarah Bereilles, ending with the audience clapping along to the song.

At the conclusion of the panel, all of the GSA members stood and recited a sentence each of “This Is For Me” by Jason Roe from the anthology. They thanked the student body for attending the event and concluded the speakout powerfully, stating, “This is for me most of all because I have the right to be happy. And this is also just as much for you.”