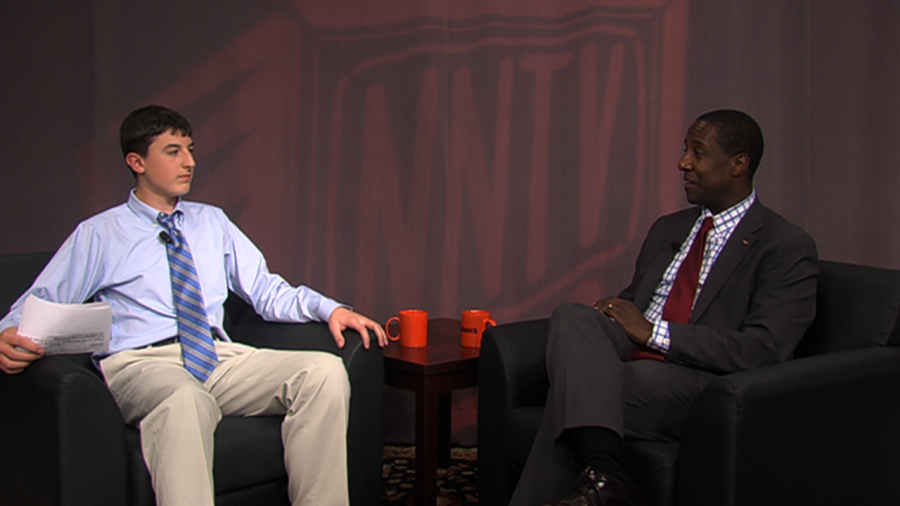 Tomorrow, the Newton mayoral election will be a contest between Mayor Setti Warren ’89 and Alderman Ted Hess-Mahan.

On the September 17 preliminary, Hess-Mahan and Warren beat out two other challengers to advance to the general election. Both candidates are Democrats but have varying views on education and fiscal policy that could determine different paths for students and teachers.

Both candidates came in for interviews with The Newtonite and TV production staff.

The interviews can be seen here.

“I’m running for mayor now because I feel very strongly that we should have a contested race for the highest office in the city,” said Hess-Mahan. “I think I have something to offer in terms of a different way to go around a number of issues including on the affordable housing issue, but also on some of the fiscal reporting and accountability issues that are very important to me.”

Warren said that he is running to continue what he started in 2009. “I’m really proud of what we have done in the last four years to get our finances in order and invest in what makes this community great: education and having one of the safest communities in our country,” he said.

Warren stressed that last March’s override package, which raised $11.4 million in property taxes for the renovation of Angier, Cabot, and Zervas elementary schools, was one of his biggest achievements. “I’m really proud the citizens of this city voted to support the override package,” Warren said. “We were able to add 50 teachers just this fall with the students population surging.”

Another one of Warren’s achievements was negotiating contracts with the three main unions in Newton: the Newton Teacher’s Association (NTA), the Newton Fire Fighters Association, and the Newton Police Association. The NTA has since endorsed Warren for mayor.

“Back in 2010, we had a structural deficit,” said Warren. “We worked collaboratively to fix that. [The new union contracts] are saving us $200 million over the next five years, have stabilized our finances, and enabled us to make new investments.”

Hess-Mahan was more critical of Warren’s override, noting that many citizens are still struggling from the effects of the economic recession and for them “a $350 increase in taxes in not insignificant.”

Hess-Mahan was also critical of the student activity fees implemented in 2011 to plug a hole in the budget, and warned that they could deter some students from participating in extracurricular activities.

The student activity fee, which was lifted last year by the School Committee, covered clubs, and did not include sports teams.

“I was a little disappointed, frankly, when the School Committee and the superintendent’s office came into the board of aldermen to discuss the budget, all they had done so far was talking with teachers whether students were discouraged from participating in activities. I think that should be expanded to talking about parents and students as well,” said Hess-Mahan.

One of Hess-Mahan’s goals is to create a more accountable government. He supports amending “the city charter to require annual long range financial forecasts that identify all of the city’s needs, and then to develop a strategic plan in order to address these needs, which would be readily available to the public.”

Hess-Mahan has also criticized the mayor over this summer’s Newton Centre traffic road re-design, saying that it caused traffic backups and wasted money.

Warren said that before he was elected, the politics of Newton was poisonous. “We were in dire financial straits. The city was eliminating programs and raising fees. Getting our finances in order took honesty, directness, and collaboration. Now, we are able to make the investments we need to, and to not eliminate programs and breadth of programs like we were before I was in office,” said Warren.

Warren, an alumni of this school and four-year class president of 1988, addressed eligible 18 year old students with his final words, some of whom may be voting in their first election tomorrow.

“I would encourage all young people to get involved at any level; to make a difference in their community. People have to step up. we have to step up together,” said Warren.