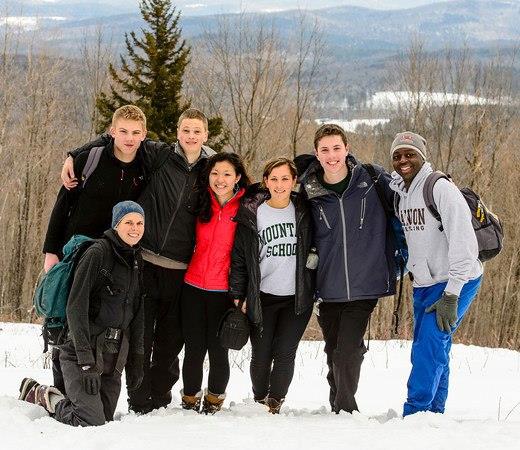 Hike mountains. Chop trees for firewood for the night. Camp overnight in the woods in two foot snow, then try to find your way back home using little more than a compass, a map, and your knowledge of the outdoors.

Speak a little Spanish, then, go to Advanced Placement (AP) United States History and do your IDs. Rinse and repeat.

For several seniors at this school, the process described above was part of their daily routines at various semester-long educational programs during the second semester of last year. While usually reserved for college students, semester-long programs such as these are popular among North students who are in search of more diverse academic experiences.

For many students who participated in a semester educational program, becoming convinced that such trips were viable options during the important junior year of high school took a fair amount of time.

Senior Sam Mayer, who attended Milton Academy’s Mountain School in Vershire, Vermont, said, “At first I was reluctant to apply to the program, thinking that it seemed too good to be true. The non-academic part of the school seemed perfect for me, but I was worried about falling behind with schoolwork.”

Even for those who were intent on signing up for a program early on, such as senior Amelia Williams, who studied in Vallenar, Chile under the Youth for Understanding-USA (YFR-USA), found it challenging to attend their programs in other respects.

“I found out about my program through very extensive research, and the idea of studying abroad in high school was exciting to me, but my parents were extremely apprehensive of the idea,” Williams said. “It took a while to convince them.”

Yet, these concerns were quickly allayed when attendees arrived at their respective institutions, and they instead found themselves having experiences that they would not forget.

“A lot of people who go to semester schools are looking for something different than their normal lives, but I’m actually pretty happy at North,” said senior Matt Thacker, who attended the High Mountain Institute (HMI) in Leadville, Colorado. “I just thought, and was correct, that HMI sounded way better. So I went. And it was.”

At a basic level, semester-long educational programs are not vacations. Rather, they are remarkably similar in structure and rigor to a normal high school, according to Jesse Metzger, who also attended HMI.

Classes at the High Mountain Institute and at The Mountain School are all offered at an honors level, replete with the traditional means of gauging performance—such as tests and essays—along with the slew of AP subjects that are traditionally offered elsewhere.

However, the way that the material of a subject is presented is generally augmented and supplemented by the unique surroundings of the school’s location itself.

According to Mayer, the academic life at the Mountain School is heavily intertwined with the study of the environment.

For example, in the AP Environmental Science class in which Mayer was enrolled, he was required to study the area around the school for insight into the actual process researchers take to study the environment.

“Everyone chose a science site somewhere on campus. Throughout the semester, we worked to figure out the history of that site from the 1700s to the present by observing and exploring the land, using tree rings, soil samples, and a variety of other techniques we learned in class,” Mayer said.

At HMI, Metzger shared a similar bond with the outdoors, which allowed for several nontraditional means of study.

“For our final exam in science, our teacher drove us into the hills and hiked us about a mile up to the site of an old, decaying mine with a view of the whole valley. We were overlooking all the geology and ecosystems we had spent the semester studying,” Metzger said.

During one of Thacker’s science classes within the first week, students were “loaded into buses, driven to a trailhead, handed heavy shovels and told to hike up a hill in waist-high snow. They then proceeded to dig snow pits in groups before learning about how the different layers of a snowpack form and what they mean to an ecosystem.”

For Williams, traveling to a Latin American country to study posed its own set of challenges in going to school, especially as all classes were taught in Spanish and in a manner that was different than at this school.

“I would spend a lot of time on homework as it was super challenging with the language barrier,” Williams said.

The unique nature of each program, however, comes from the different ways an average school day is conducted.

At the Mountain School, one of the key aspects of living on campus is the residences, farm, and 180 acres of forest on site.

For two-and-a half hours after lunch, for example, students are required to attend a work period in which they tend to the chores required to help maintain the school’s normal functions.

“We chopped trees, split wood, worked on the farm, scrubbed potatoes, or did anything else that needed to get done,” Mayer said.

As this connection with the outdoors is vital to the atmosphere of the school, Mayer said that students were obligated to complete an “outdoor program,” in which students learned wilderness navigation skills, first aid, and survival tactics. The program culminated in a four day, three night solo trek into the woods to test their ability to survive unaided.

At HMI, while similar in its emphasis on excursions into the wilderness, the atmosphere was noticeably different.

According to Metzger, if the temperature in the Rocky Mountains was greater than zero degrees Fahrenheit, students would wake up to take an early morning run, then return to eat breakfast and do chores before attending classes from nine until around dinner-time.

The “wilderness component” of the program, however, was based on three backcountry expeditions of one to two weeks of length into the frozen Colorado forests in the winter. There, they would march from campsite to campsite at an altitude of several thousand feet above sea-level, occasionally stopping for group discussions or schoolwork, Metzger said.

At night, they would sleep in “quigloos,” a combination of an igloo and a quinzee, a type of snow shelter.

“It was incredible living in the snow—we were completely surrounded by it all the time and dependent on it,” Metzger said.

For Williams, the thrill of the semester abroad program simply came from living daily life in another country with customs much different than our own.

Williams said that she was matched with a host family with whom she became very close.

On weekends in her town in the Atacama Desert, Williams said that her host family would hold barbecues with the rest of the extended family, which lived within a few streets of their house.

“These gatherings would last for hours as we would all relax, laugh and eat together,” Williams said.

Williams and host family would also go rollerblading or hiking in the sand dunes in the Atacama, as well.

The overall response of these programs has been positive, with many remarking that it was one of the best experiences that he or she has had so far.

Thacker said that HMI had such a “sense of an intimate and open community among all levels of those involved in it.” Metzger similarly remarked that a spontaneous “cinnamon roll hug” that formed in the cold weather reflected this strong sense of shared family.

Williams said, “So many people in Chile had opened their lives to me, had shared with me, had given me so much.

“I remember looking through the smeared window in the stuffy bus, with tears rolling down my cheeks, my hands filled with last minute cards and gifts on my way to the airport, and I realized truly how much I changed from my experience,” she added.