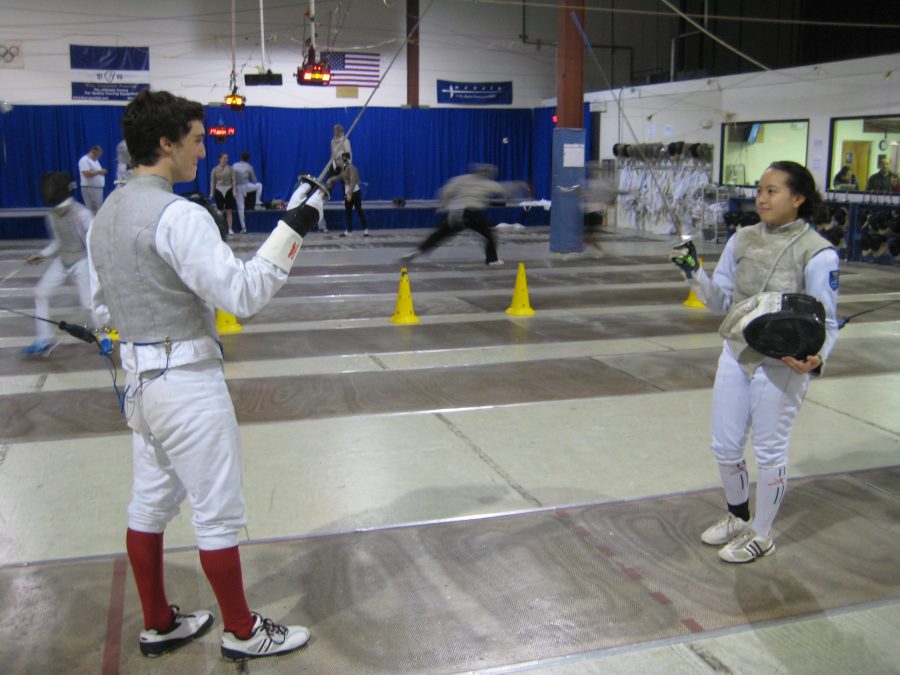 The Newtonite
by Samantha Libraty
To begin, fencers salute each other. Then, the referee calls “En-garde,” and the bout commences.
Quick feet, swords flying and a touch of the tip sends a ringing buzz through the crowd.
“Everything about fencing is amazing. You need to be really fast and precise, and you need to  think very fast on what action to do next in the middle of a match,” junior Cooper Jackson explained when talking about his love of fencing.
Jackson currently fences at Boston Fencing Club in Waltham with coach Ed Ballinger, a member of the 1976 US Olympic Team in Foil and a two-time Men’s Foil National Champion, according to Boston Fencing Club’s website.
Jackson said he started fencing competitively a year and a half ago, after a long hiatus from fencing. “I love to fence because I love the sport.”
He began fencing again because he said he “missed the sport.” Jackson takes lessons four times a week for three hours per day, he said.
“Recently, I have started doing competitions outside of the State, such as in Vermont and Washington State, as well as a national event in Reno, Nev. I’ll be attending later this year,” Jackson said.
Jackson is a foil fencer, which means he uses the foil, the most common fencing weapon. It is light and flexible. The other two fencing weapons are the saber and épée.
The foil is used as a thrusting weapon only. A point only counts if the tip of the sword touches the opponent’s target zone, which includes the entire torso and groin areas. Heads, arms and legs are considered off target.
The goal of foil fencing is to obtain the most amount of points from touches.
“I started fencing when I was eight because I thought it was really cool to be sword fighting.In the movies, it’s really intense and really cool,” Jackson said.
His coach, Ballinger said, “Cooper is a tremendous athlete, and his fencing will improve when he realizes and uses his athleticism.”
“He is a very nice young man, but when he competes, I wish he wouldn’t be so nice because you can see his basic personality coming out. Sometimes, you have to disguise that and put it aside when you fence,” Ballinger said.
In addition to being a strong fencer himself, Jackson also helps to foster other kids’ love of fencing when he referees junior matches, he said.
Ballinger said, “Jackson does a great job with refereeing.
“He helps the young kids really understand the rules of fencing, which will help them to improve their fencing,” he said.
Jackson was also involved in this school’s fencing club last year, he said.
“I helped out in the club because there wasn’t a seasoned foil fencer. I helped teach drills to the people who didn’t really know how to fence with a foil,” he said.
Jackson said, “Unfortunately, I didn’t have the time this year to be part of the club, but I strongly suggest that everyone try out the sport through the club at school.”
The fencing club meets Wednesdays after school in the cafeteria. Sophomore Aris Vanderpool is the officer, and Latin teacher Elise Goodman Tuchmayer is the adviser.
Jackson said it is important to become involved in an activity outside of school, like he is with fencing.
“I think it’s important to have something outside of school because it makes you meet new people,” he said.
“It also makes you feel like you belong to something important, which I think everyone should feel about something.”
Delete Image
Align Left
Align Center
Align Right
Align Left
Align Center
Delete Heading