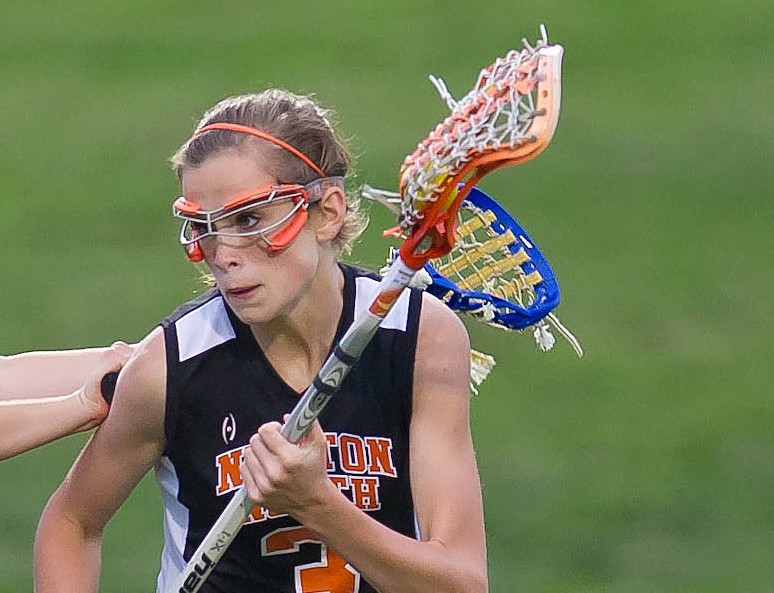 Covered by Needham defender Taylor Thomas, junior Shannon Fitzgerald cradles the ball in a 17-9 loss at Needham May 23, 2011.

The Newtonite
by David Kwartler
Freshmen on the varsity team are often bench-warmers, but as a freshman, junior Shannon Fitzgerald said she had the opportunity to take her love of lacrosse to the next level.
“The sport, whether it’s soccer or lacrosse, doesn’t matter. The objective is to win and the only way to win is to win as a team,” said Fitzgerald who has been a member of this school’s varsity soccer and lacrosse teams since freshman year.
Fitzgerald was exposed to sports at a young age. Her mother played three sports at this school, and her father and siblings have played lacrosse for most of their lives.
“Seeing my siblings succeed with sports made me want to work just as hard as them,” said Fitzgerald. “I grew up across the street from the Albemarle Field, which pushed me into becoming an athlete.”
Her parents built an ice rink and encouraged her to skate. In addition, bonding with her siblings pushed her into sports and “made me realize how a sports team is like a family,” said Fitzgerald.
Her first team sport was kindergarten soccer, and her mom taught her game strategy using Barbie dolls to show tactics and moves, according to Fitzgerald.
Despite her mother’s efforts, “during games, I would be all over the place, lost in my own imaginative world,” said Fitzgerald. “I’d just kick the ball whenever it came to me and only half the time it would go towards my own goal.”
Fitzgerald’s lacrosse career started in third grade, when she played for the Newton Girls Lacrosse U11 team.
The summer before freshman year, Fitzgerald tried out for soccer, working hard to try to make JV.
After tryouts and scrimmages, she was accepted onto varsity.
“I knew that practicing with people who are more skilled than you can make you a better player,” she said.
Although the coach told her not to expect playing time, she replaced a senior who was injured in the first game of the season. Fitzgerald scored the only goal of the game. She  has been an active member of the team since then.
In addition to playing sports at this school, Fitzgerald runs lacrosse clinics for elementary school children and represents this school on the Newton Girls Lacrosse Board, a committee that contributes to promoting youth lacrosse in Newton.
“I enjoy coaching kids because of how much I am able to learn from them and to stay connected to the community,” she said.
The effort she puts into coaching is rewarded with the “faces that light up suddenly when they understand what I am teaching,” she said.
She also plays for the Revolution Lacrosse 2014 team.
The team helped her to further progress her lacrosse skills to prepare for her future, she said.
According to Revolution Lacrosse director Lukas Cash, “She has an amazing personality, contagious smile and inspiring athleticism.
“She made the commitment to reach her best and never lost sight of her goal.”
According to Cash, Fitzgerald’s personal success does not overshadow her teammates.
Girls’ soccer coach James Hamblin said Fitzgerald frequently scores hat-tricks in games, a small personal mark of triumph, but her most significant recognition is being named the number two player on the Bay State Conference All-Star team and the number eight player in the All State Soccer Team.
“The most important thing is playing as a team,” said Fitzgerald. “You believe in each other  and you’re there for each other. It’s all about being a good teammate and pushing others towards their goals, having faith that everyone is doing their job and that we’re not going to quit on each other.”
One of the most important parts of sports for  Fitzgerald is that she considers her soccer team her family. “We support and stand up for each other like siblings,” she said.
Since freshman year, feeling like a part of something more significant than “just a group of girls playing soccer” has made the sport meaningful for her. Students who have graduated even come back to have dinner with the team during vacations, Fitzgerald said.
On a similar note, her favorite day of the year is Senior Day, the last home game of the season for seniors. The team decorates the school and gathers all the spirit they can.
“Although saying goodbye is sad, our whole team is there for one another,” she said. “Seeing the look on their faces when they see the decorations is what makes the hard work worth it.”
For Fitzgerald, the most difficult part of playing sports is dealing with losses.
“I hate to lose more than I like to win,” she said. The hardest part of the sport to deal with is the responsibility after a loss, according to Fitzgerald. After a loss, “I feel as if I didn’t do my part to help the team to win,” she said.
When the team lost to Lincoln-Sudbury in the quarterfinals of the State Tournament this fall, “I cried the whole way home,” said Fitzgerald.
In the near future, Fitzgerald plans to complete her fourth year of varsity soccer next fall. In addition, she has agreed to play lacrosse at John Hopkins in Baltimore and will attend in the fall of 2014.
Cash believes, “Hopkins is very excited to have Shannon, as they know she will contribute early as a Blue Jay.”
Delete Image
Align Left
Align Center
Align Right
Align Left
Align Center
Delete Heading