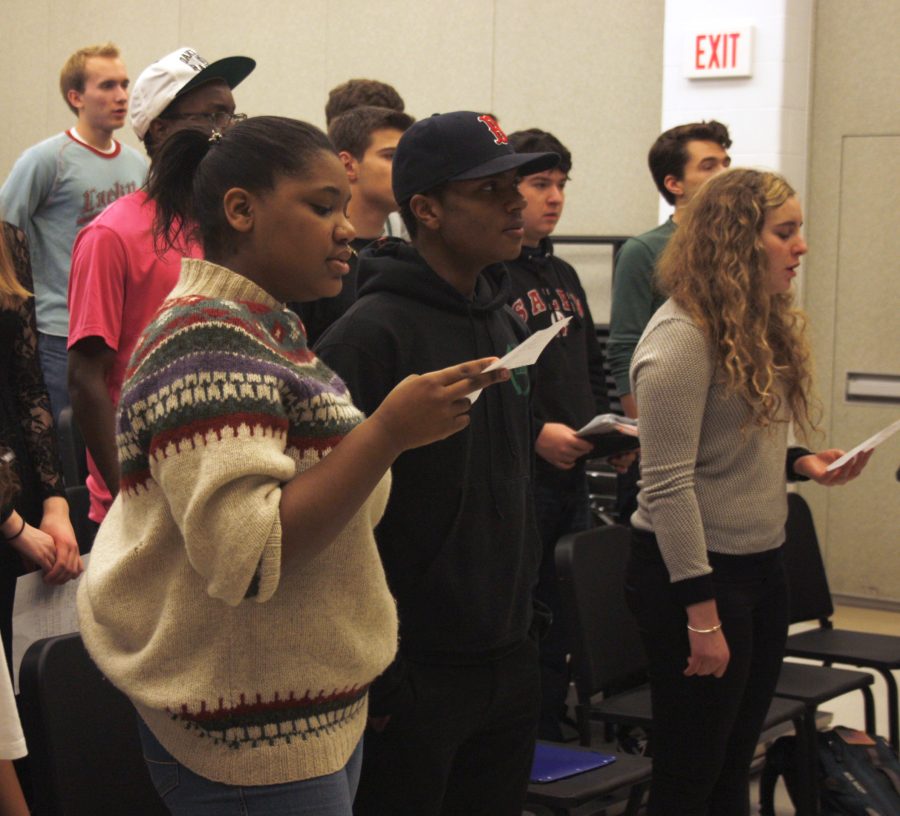 The Newtonite
by Leah Budson
Telling a story is an important part of all music, explained Jubilee Singers director Sheldon Reid.
The chorus, the only music ensemble at this school to have a concert to itself, will perform Saturday, Jan. 26 at 7 p.m. in the auditorium. Tickets will be sold at the door for $10.
Reid explained a benefits of Jubilee having a concert to itself. “Because there is less transition, it really allows you to tell a story to the audience and take them from beginning to end,” he said. “You have a little more control of the atmosphere.”
With a variety of songs, the Jubilee Singers will tell the complete story African history by recognizing the struggle while celebrating the culture, said Reid.
“We try to really tell a story, even if it is just an emotional one as opposed to an ideological one.”
At the concert, Jubilee will be performing several spirituals, contemporary gospel pieces and original compositions, some of which will be sung a cappella.
Jubilee will perform an a cappella spiritual “Ride the Chariot,” arranged by Henry Smith. “It is very energetic and has a lot of rolling bass lines,” Reid said. “We have a really great bass section this year, so I have been trying to do songs that rely on that.”
The chorus will also sing “Please Don’t Forget About Me” by Joshua’s Troop, a contemporary gospel piece. According to Reid, the song speaks to the individual’s need for connection with God.
In addition, Jubilee will perform “Ain’t Gonna Let Nobody Turn Me Around,” a traditional peice from the civil rights movement, and “Jubilee,” written by Reid about the choir.
The representation of African culture is one of the reasons that it is important for Jubilee to have a full concert to perform, according to Reid. “There is a lot to be represented and in order to even give a little bit of its scope, it requires more than just two songs at a concert,” he said.
African history and culture is woefully underrepresented in education, according to Reid. By celebrating African culture and performing music from the African diaspora, Jubilee is able to help represent this essential area of the world’s history and culture through their music, said Reid.
“Largely African history has been left out of our history books, and as much as we have been making changes and progress, the more time we get to focus on and look at African culture, the better,” said Reid. “I think Jubilee needs its own night just so we can spend some more time looking at, celebrating, reveling in and learning about African history and African culture.”
Senior Kristian Sumner, a singer in the choir, explained the unique atmosphere that Jubilee concerts have. “The audience is expected to participate. People clap along, stand up to dance or even just sway,” she said. “We are singing so people can hear our music and so we can bring joy into someone’s day.”
Delete Image
Align Left
Align Center
Align Right
Align Left
Align Center
Delete Heading